A fast moving organization where technology is optimizing business productively and enabling rapid growth and profitability.

“Bill’s care for his work comes through. I’ve worked with Mode:Green on other projects as well and I’ve seen them have the same successes for various different builds.”
– Jason Burns, Chief Information Officer, Hunter Roberts Construction Group

Hunter Roberts Construction Group is renowned for their construction services, for which they have been awarded for their work at the Union League of Philadelphia, the Reed Smith Conference Center, and Red Bull Arena, as well as 2008 Contractor of the Year after their third year of business. The company grew out of their original 2005 headquarters, and upgraded to a new space to house their 300 full-time employees.

Managing large-scale construction projects requires a great deal of collaboration and cross-team input, which makes meeting rooms and technology a key part of Hunter Roberts’ day-to-day operations. When they moved into their new headquarters they decided to design conference and meeting rooms that would allow for collaboration in many ways. They insisted that it meet their own standards of construction and technological excellence. In order to create the conference space that they envisioned, Hunter Roberts enlisted integrated building technology firm Mode:Green to coordinate and install the video walls, interactive boards and control system

Challenges to be Resolved

During the design process, Hunter Roberts identified some areas that held them back in their old office and they made sure they would avoid these problem areas in their new space. The conference and meeting rooms in Hunter Roberts’ new headquarters required state-of-theart technology, that wouldn’t waste time or require the frequent need for technical support for presentations or video conference calls — a constant issue in the old office. Jason Burns, Chief Information Officer at Hunter Roberts Construction Group explained, “We didn’t want IT to be called every time something had to be put up to fidget with video formatting. It was a constant problem on the older system where IT had to troubleshoot settings for things to display properly.”

They planned for the new system to be more complex, but stressed the importance of it being simple to use. “This was a big need, it had to be user friendly,” said Burns. “It was wasting a lot of time setting up meetings and it was always a problem because machines change over time.” Creating complex systems that are easy to use is a specialty of Mode:Green’s who designs and installs the system based on their client’s vision for their space. They draw their expertise from designing systems for the hospitality applications, where systems have to be as user-friendly as possible for guests to be able to use them as soon as they arrive. “Simple ease of use is crucial for these types of systems,” said Mode:Green President Bill Lally. “In an office environment, technology can go un-used if the staff isn’t comfortable using it.”

“Bill himself is involved in the technology that they put in place; they’re picky about what they’re putting in place before you get picky about it,” said Burns. “He only cares that the project is in-line with the vision of the client. And he’s certainly quick to offer suggestions of things that are easy to add.” For the Hunter Roberts conference rooms, Mode:Green evaluated the problems that Hunter Roberts had, and proposed multiple types of control devices, as well as brand-new technology that Lally had recently discovered, evaluated and thought would be best for the job. The goal was to design a system with updated technology that wouldn’t have the issues that they’d encountered before, to make collaboration smoother with their clients.

Burns described the end result and technological experience that Hunter Roberts desired for the rooms. Mode:Green took Hunter Roberts’ ideas and brainstormed different methods of bringing their vision to life, including a plan for how it would work through their construction process.

Hunter Roberts has several areas that they wanted to work in tandem. “We wanted to have a system that, if we wanted to have an event, could play AV across the entire office,” explained Burns. “We have a primary conference area for public meetings and then internal conference rooms that were all inter-linked.” Combining systems into one user interface is a challenge, but an area where Mode:Green has experience. “Having over-arching control of the systems across rooms is important in a lot of our projects,” said Lally. “For Hunter Roberts we created a system of interactive screens that fit their vision of a seamless experience, where they can all display the same content simultaneously when they host large events.”

Hunter Roberts was interested in having a broadcast control for their training room, and Mode:Green found a way to make it happen. Burns was surprised at the design, because Mode:Green presented an option that was more affordable than they had anticipated; “Usually only huge companies have a broadcasting room, but we were able to do it affordably without large systems. That was something that we were looking for but we didn’t know how to achieve it. ”

Mode:Green joined in the project coordination from the start of the design process, which made the installation easier to do throughout construction. Burns said, “They worked with the architect and electricians a lot, and the coordination was necessary in order to produce the job.” “We’re involved from the start so we can make sure that everything turns out as it was intended,” stated Lally. Burns agrees, “I think that showing up to progress meetings early on and getting involved with who’s doing the cabling is a big help.” To prevent delays from the technology installation that was the last in the processes, Mode:Green configured all of the devices off-site to make it easier to install in the shortest amount of time.

“Their pre-staging is a big advantage with them. I haven’t seen a lot of AV companies doing that where they ship the devices onsite with the programming done,” commented Burns. “Mode:Green did the smart thing and set up equipment off-site — configuration was done in the warehouse, which made installation a lot simpler. A lot of companies would wait until the last minute to stage it.”

As with any construction process, there were a few changes during construction that came up unexpectedly; “Mode:Green helped troubleshoot and set up the programming for the interactive boards that were in the rooms,” said Burns. He commented that his team didn’t know how exactly the master control system would work, but Mode:Green was able to customize it after Hunter Roberts’ first major event.

The unique conference room technology integration and master control system allows the Hunter Roberts team to work collaboratively with their clients and host events with a seamless experience that works well every time. Having seen this process, Lally commented: “It’s fascinating to watch them conduct a meeting. They may pull up Google Earth to look at a jobsite, then bring up the drawings and annotate them with virtual markers. It’s a very effective way to work.”

Aside from the expertise that Mode:Green brings, Burns noted, “Bill’s care for his work comes through. I’ve worked with Mode:Green on other projects as well and I’ve seen them have the same successes for various different builds.” Hunter Roberts Construction Group has high standards for their own work, and wanted to push the boundaries in their own headquarters. 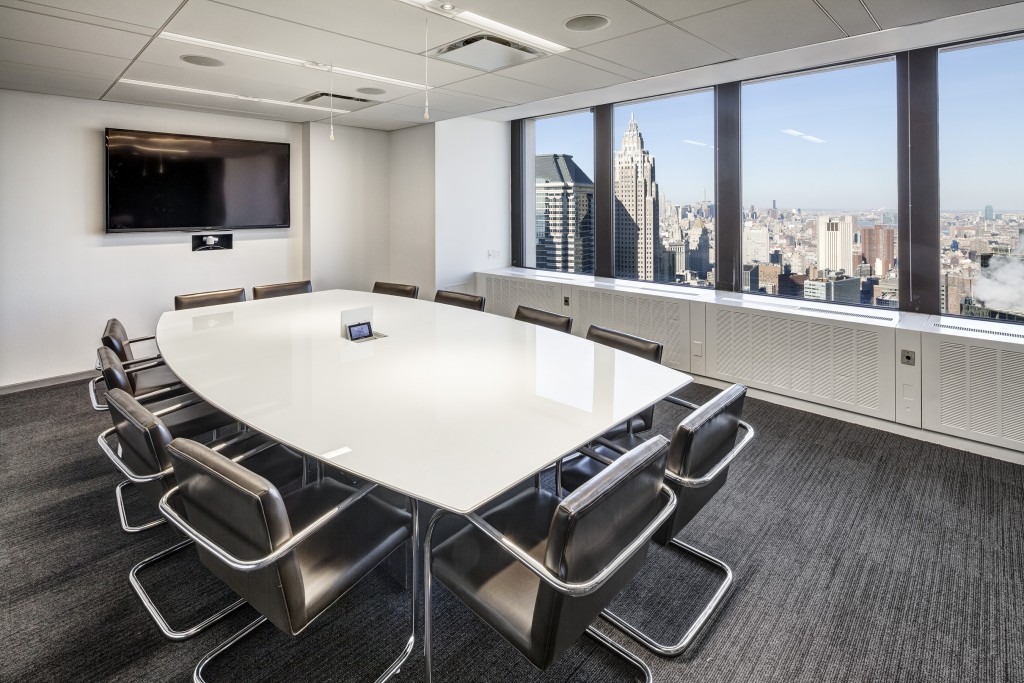 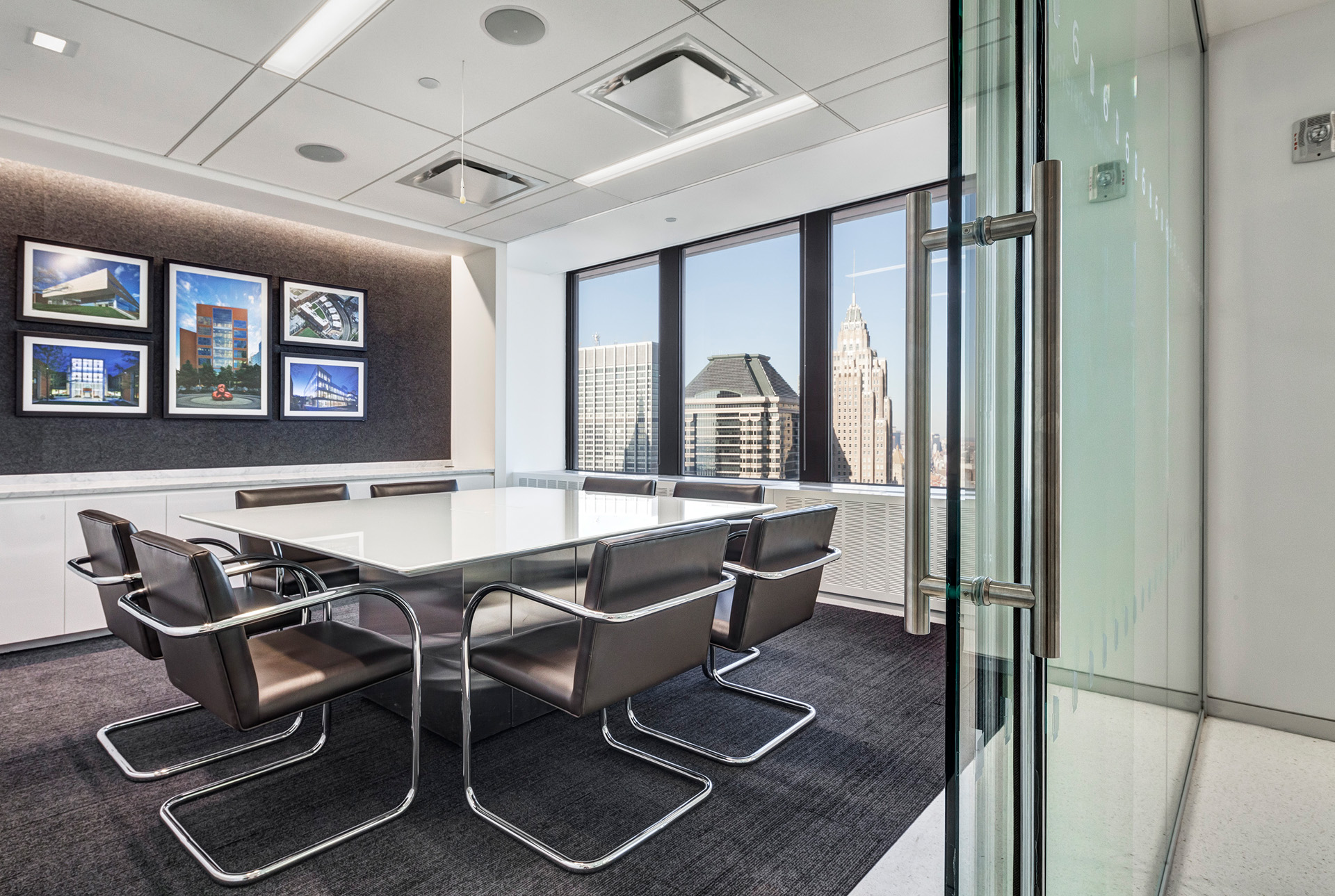 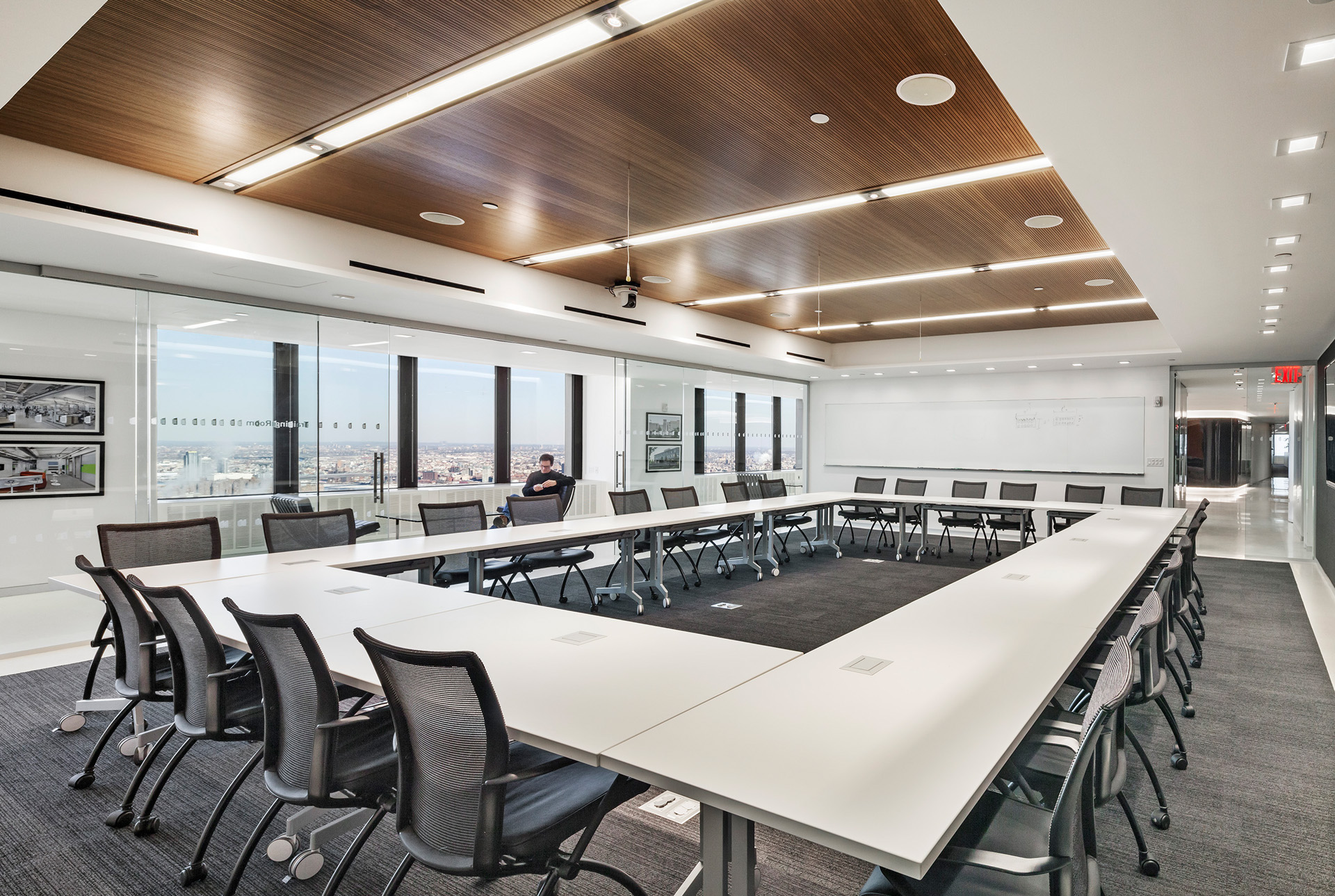 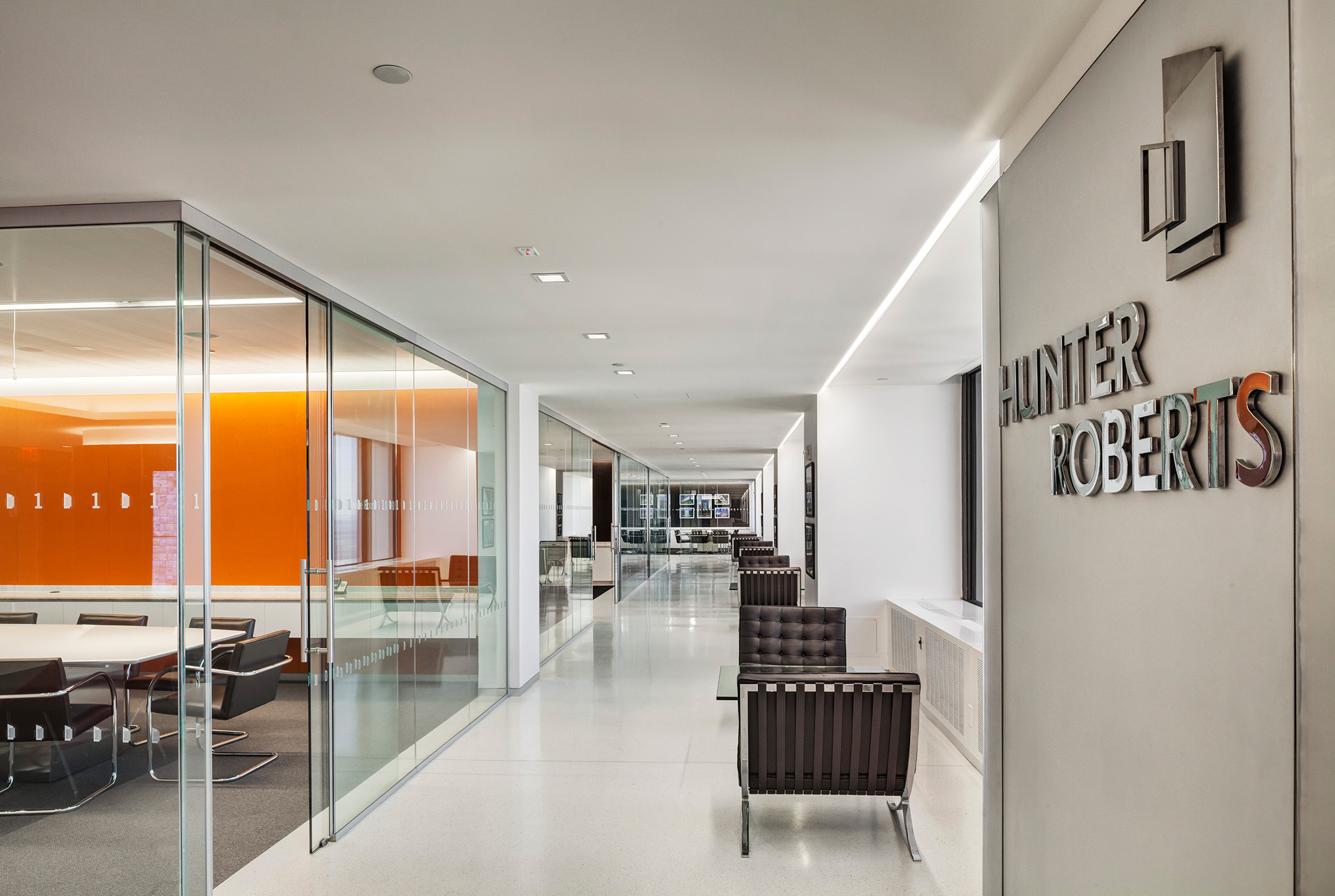 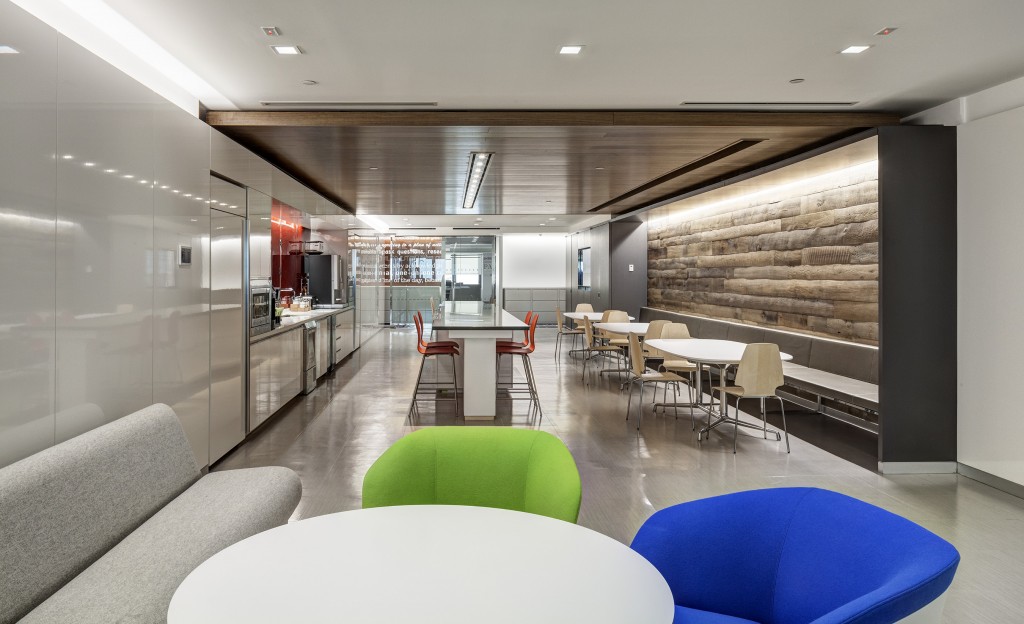